Title: Bringing Down the Duke

“England, 1879. Annabelle Archer, the brilliant but destitute daughter of a country vicar, has earned herself a place among the first cohort of female students at the renowned University of Oxford. In return for her scholarship, she must support the rising women’s suffrage movement. Her charge: recruit men of influence to champion their cause. Her target: Sebastian Devereux, the cold and calculating Duke of Montgomery who steers Britain’s politics at the Queen’s command. Her challenge: not to give in to the powerful attraction she can’t deny for the man who opposes everything she stands for.

Sebastian is appalled to find a suffragist squad has infiltrated his ducal home, but the real threat is his impossible feelings for green-eyed beauty Annabelle. He is looking for a wife of equal standing to secure the legacy he has worked so hard to rebuild, not an outspoken commoner who could never be his duchess. But he wouldn’t be the greatest strategist of the Kingdom if he couldn’t claim this alluring bluestocking without the promise of a ring…or could he?

Locked in a battle with rising passion and a will matching her own, Annabelle will learn just what it takes to topple a duke…. ”

Another book that was quite an un-expectantly enjoyable read for me. As one of my Book of the Month backlist books, Bringing Down the Duke was the February pick for my Badass Babes Book Club, which is one of the Instagram book clubs I regularly join. It’s a fairly light historical fiction romance that takes place in Victorian London.

Peggy, after the death of her father, is forced to serve her cousin. She cares for his children and cleans his home. She has never expected much from her life, including never harboring the believe she will have a husband. When Oxford college begins to enroll a small group of women into the college, Peggy seizes her chance and convincing her cousin to let her leave for London. The biggest challenge is that her scholarship, funded by a Women’s suffrage group, is dependent upon her doing her part for the movement. As the women work to prompt Women’s rights, especially overturning the Women’s Property act, Peggy finds herself the unlikely houseguest of Sebastian or otherwise known as the wealthy and very cold Duke of Montgomery.

Told in alternating perspectives between Peggy and Sebastian, the chemistry between the two is immediate and Dunmore does an excellent job of building the relationship between the two. She does all this while not letting Peggy wavier on her moral principals, which we too often see in women who are swept off their feet. Instead Peggy’s character is stubborn and stands behind her principals, never wavier because of whimsical notions of the heart.

I really enjoyed that while Dunmore has given us a lighthearted romance, she also did provides the reader with plenty of historical facts. Particular around the women’s suffrage movement in the late 19th and early 20th century. Growing up in the states, we really only were ever taught limited amounts about the women’s suffrage movement in the United States. While this book focuses more on the plight and struggle of English women, it’s really a key turning point for much of western society, in terms of granting women’s rights. It still amazing me that US women didn’t experience the same freedom’s of European women until roughly 30-50 years later. For a country that prompts freedom, we sometimes find ourselves behind the power curb and relatively old fashion compared to our European counterparts.

This book is the perfect mixture for a historical romance. I highly enjoyed reading this book and cannot wait for the next book in the League of Extraordinary Women series, which comes out this year! This book is currently out and I gave it ★★★★★.

This book is out now! If you think you’d like to read this book get it HERE!

I hope you enjoyed my thoughts on Bringing Down the Duke. If you liked this review please let me know either by commenting below or by visiting my instagram @speakingof_books. 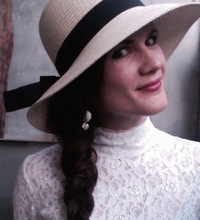 Debut author Evie Dunmore wrote BRINGING DOWN THE DUKE inspired by the magical scenery of Oxford and her passion for romance, women pioneers, and all things Victorian.

In her civilian life, she is a strategy consultant with a M.Sc. in Diplomacy from Oxford. Scotland and the great outdoors have a special place in her heart, so she can frequently be found climbing the Highlands and hunting for woolly tartan blanket bargains.

Evie lives in Europe and pours her fascination with 19th century Britain into her writing. She is a member of the British Romantic Novelists’ Association (RNA).

Speaking of...Book Review!⠀ .⠀ One of my favorite series has the 16th book coming out this summer & is celebrating its 20 year anniversary! I started listening to The Dresden files last year. I need a good audiobook series to listen to when while marathon training and this series was perfect. Not only is this series basically Nancy Drew meets Harry Potter but the narrator is amazing! I’m super bummed that Peace Talks, which comes out in July isn’t on audio yet but I still loved reading all about Dresden’s newest shenanigans. Thank you @orbitbooks for my copy! ⠀ .⠀ Now I’m starting to relisten to all of these books and I’ve been using my new @sudio Tolv earbuds to do! These earbuds give you 7 hours of listen time with 4 extra charges in their case which equals 6 days of charge time, so I don’t how to worry about forgetting to charge my headphones before a run. These buds are super comfy and come in some fun colors! I still picked white though because I need them to match my all my workout clothes 😛. Anyway if you use my code SPEAKING15, you can get 15% off a new pair of headphones! #treatyoself ⠀ .⠀ #speakingofbooks #thedresdenfiles #peacetalks #sudiomoments #sudio #audiobooks #alwaysreading #partner #yelpreads #bookseries #bookreview #bookreviews #bookreviewsneedlovetoo #notjustaprettybook
Speaking of...April TMR⠀ .⠀ Is my April reading list almost as tall as Sadie? Yes, yes it is! Is this all I want to read this month? Nope, not at all. ⠀ .⠀ Welcome to April where we’re all quarantined and our reading lists are out of control. Good thing I have nowhere to go for the next month! Head over to the blog today, link in bio, to see what I’m planning on reading this month! ⠀ .⠀ What are you planning on reading in April?!⠀ .⠀ .⠀ #speakingof #speakingofbooks #speakingofblog #bookblogger #apriltmr #readinglist #bookstagram #bookstagrammer #bookstabuddies📚 #alwaysreading #sadielady #pupsandpages
Speaking of...March Wrap Up⠀ .⠀ One more day of the longest month ever! This month has been a whirlwind but even with everything going on I managed to get 13 books in this month! 13! That’s such a good reading month for me! Half the books I read we’re digital copies most of which were ARCs but I also read 7 really great physical books too. I’m also officially over 30% of the way to my 2020 reading goal which is way further along than I thought I would be at this point. I’ve got a full write up of this month’s reading on the blog today, click the link in my bio to get a full glimpse into what I read. ⠀ .⠀ Spoiler my favorite books this month were: A Good Neighborhood, Little Secrets, & The Dark Familiar (which comes out today!). What were your favorite reads this month??? ⠀ .⠀ Huge thanks to the tagged publishers for my advanced copies of Hard Cash Valley, Little Secrets, Cries from the Lost Island, The Woman in the Mirror, The New Husband, & The Only Good Indians! ⠀ .⠀ .⠀ #arcreads #speakingofbooks #speakingofblog #newbooks #alwaysreading #marchwrapup #bookstack #theonlygoodindians #thewomeninthemirror #littlesecrets #hardcashvalley #thenewhusband #bookstagrammer #bookblogger #sablogger #booklover #bookobsessed #bookstabuddies📚 #alwaysreading #marchreads #marchreleases #aprilreleases
Speaking of...Reading Format⠀ .⠀ Happy Monday everyone, today’s big question is eBooks vs. physical books?? I go through phases where I only read physical books and then only read eBooks. #bookstagram has definitely made physical books more appeals because they’re so much more photogenic. However, when I travel I always have eBooks for the convenience. I also find that I read faster with an eBook. So what do you prefer?? Do you mix it up like more or do you only read one format??⠀ .⠀ Also this is your weekly reminder to try your jeans at least once a week during this time of self-isolation and sweatpants. I work from home normally, so I live in giant t-shirts and comfy pants. But I always make sure to put jeans on once a week, that way it’s not a surprise when I’m rushing that they don’t fit 😂. ⠀ .⠀ .⠀ #speakingofbooks #speakingof #speakingofblog #ebooks #phsyicalbooks #readersofinstagram #bookstabuddies📚 #riotgram #yelpreads #alwaysreading #kindlebooks #weekendreading #booklover #books #bookobsessed
Speaking of...Sadie Sunday! ⠀ .⠀ Another beautiful day in quarantine & South Texas. We did all our chores yesterday so I’m spending today totally immersed in Little Secrets and forcing Sadie to snuggle with me! Huge thank you to @minotaur_books for my advanced copy! .⠀ What is everyone else up to today??⠀ .⠀ .⠀ #speakingofcurrentlyreading #currentlyreading #speakingofbooks #speakingofblog #bookblogger #sablogger #littlesecrets #sadiesunday #ladysadie #pupsandpages #bookstagrammer #booklover
Speaking of...Book of the month Add-on’s!⠀ .⠀ I’ve been seeing a ton of questions on Facebook & Instagram where folks are asking what add-ons they should put into their blue boxes each month! I’m here to help y’all out. I’ve put together my full list of add-on recommendations that are showing as option on BOTM website currently. My number 1 recommend is actually a tie between: The Seven Husbands of Evelyn Hugo, The Girls, & The Hearts Invisible Furies! These are three of my all time favorite books and I highly recommend them! Head over to the blog for my full list of recommendations! ⠀ .⠀ What is everyone picking for their April boxes?? Any major add-ons you’d recommend??⠀ .⠀ .⠀ #speakingof #speakingofbotm #speakingofbooks #speakingofblog #bookblogger #bookofthemonth #botm #alwaysreading #thesevenhusbandsofevelynhugo #nothingtoseehere #bringingdowntheduke #thetenthousanddoorsofjanuary #circe #theblinds #bookstagrammer #bookstagram #booklover #alwaysreading #booksubscriptionbox #reader #bookstabuddies📚 #riotgram #yelpreads