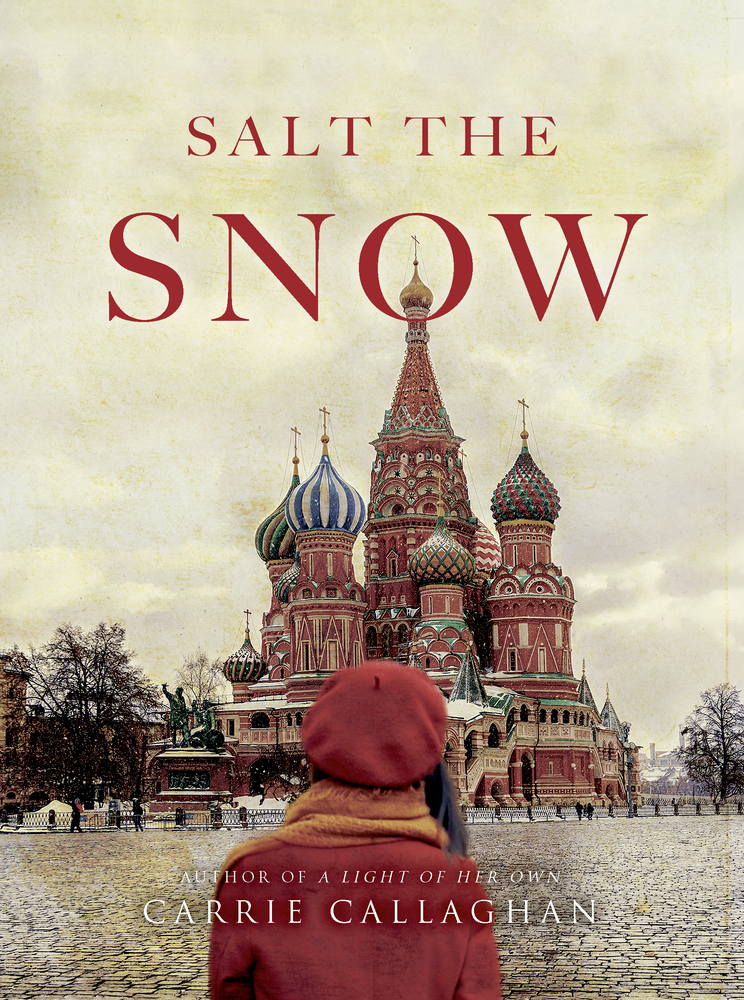 “Based on the life of one of the first female war correspondents whose work has been all but lost to history. American journalist Milly Bennett has covered murders in San Francisco, fires in Hawaii, and a civil war in China, but 1930s Moscow presents her greatest challenge yet. When her young Russian husband is suddenly arrested by the secret police, Milly tries to get him released. But his arrest reveals both painful secrets about her marriage and hard truths about the Soviet state she has been working to serve. Disillusioned, and pulled toward the front lines of a captivating new conflict, Milly must find a way to do the right thing for her husband, her conscience, and her heart. ”

This book is for my historical fiction fans, especially those interested in Russia after the Russian Revolutions and a bit more info on the Spanish War. I had really high expectations for this book. It’s based on a real women and I love good stories about strong women before their time. However, this book fell a little flat for me, mainly because it was more character driven than plot driven. I’m more into plot driven books so that’s already a negative for me.

While I thought Callaghan’s writing was lovely, there were a few instances I just couldn’t find to be believable about Milly. Her constant lack of confidence and point out her physical flaw are unrealistic to me. Maybe that’s how she really was, but a women traveling around the world, writing in a man’s world, should have a bigger spine than that in my opinion.

Callaghan did mention in her notes that Bennett had quite a few lovers, which I believe. I don’t believe she continually threw herself at men and justified her self worth by her lovers. I just can’t see a late 30 year old women in the 30’s doing that. Once again, maybe she did fall in love easier, maybe she did let them sway her, I just didn’t find it believable.

I did really enjoy getting a view into Communist Russia after their Civil War but before the Cold War. I think they’re is a lot of history there and I do love Russian history. I also thought it was interesting that Bennett fully believed in the Communist party. She fully felt they were the answer to a better society and she fought to tell their stories in both Russia and during the Spanish Civil War. As an American, we mainly hear stories from an anti-communist perspective and while I don’t necessarily agree with communism I find I value hearing about it from another’s perspective. Seems there were quite a few Americans, British, and other citizen’s who really believed in the cause and were willing to fight in a civil war that wasn’t even for their country.

Overall, this was a ★★★ read. I wanted to like it more, but I felt the story could have been told more impactfully. I don’t regret reading it, as it’s peaked my curiousity into why young American women were heading to Soviet Russia, but it’s not something I would recommend.

I love to google historical fiction books, especially women and I stumbled upon an articular from UT’s (University of Texas’ College of Liberal Arts magazine) that perfectly mirrors a lot of my own thoughts while reading this book. I highly recommend reading the whole articule if you’re interested in gaining more information around the appeal of Soviet Russia to young American women. See it HERE! 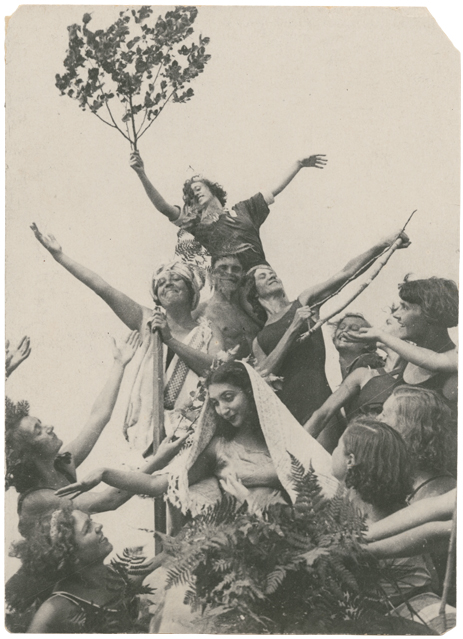 American dancer and choreographer Pauline Koner with her students from the Lesgaft Physical Culture Institute demonstrating their version of the “new Soviet Dance.” Koner taught and performed in the Soviet Union from 1934 to 1936. Photo credit: Pauline Koner papers, Jerome Robbins Dance Division, The New York Public Library for the Performing Arts, Astor, Lennox and Tilden Foundations

“We don’t usually think of Moscow as a popular desintation for single American women of the twentieth century,: writes Julia Mickenber, associate professor of American studies, in her new book American Girls in Red Russia: Chasing the Soviet Dream. “A Mythology surrounds the ‘lost generation’ of Americans who sought out Paris in the 1920s, but few know about the exodus of thousands of Americans – Former Paris expats among them – to the ‘red Jerusalem’…Even fewer are aware of ‘red Russia’s particular pull for ‘American girls,’ or more accurately, independent, education and adventurous ‘new women’. – David Ochsner UT’s College of Liberal Arts Magazine May 2017

This book comes out February 4th! If you think you’d like to read this book, pre-order your copy HERE!

I hope you enjoyed my thoughts on Salt the Snow. If you liked this review please let me know either by commenting below or by visiting my Instagram @speakingof_books.  Huge thanks to Netgallery for my advanced copy of the book. 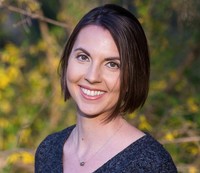 arrie Callaghan is the author of the historical novels A Light of Her Own. Her short stories have been published in multiple literary journals around the country. She is a senior editor with the Washington Independent Review of Books. She lives in Maryland with her family and two ridiculous cats. She loves season of all kinds, history, and tea.

Speaking of...BUDDY READ ANNOUNCEMENT⠀ .⠀ On Sunday we had our February discussion for @letsreadrantrepeat and once again I am reminded how amazing the #bookstagram community is. I’m so grateful to have so many amazing people to chat with about books & to have made so many friends in this community!! Especially @readwithwine because without #booksta I never would have know she lives 7 minutes from me! ⠀ .⠀ Ok enough sap! Our March pick for our book club #letsreadrantrepeat is going to be, by popular demand, The Holdout! Our LIVE discussion will be held Sunday March 15th at 7pm CST over on the @letsreadrantrepeat stories! Are you wanting to read this book?? Then join us by commenting below 👇🏼👇🏼👇🏼. ⠀ .⠀ .⠀ #spekaingofbooks #buddyread #bookclub #virtualbookclub #theholdout #crimebook #letsreadrantrepeatmarch #botm #bookofthemonth #readingwithfriends #pupsandpages #ladysadie #booksanddogs #dogsofinstagram #books #bookblogger #speakingofbookclubs #speakingofblog #speakingof
Speaking of...Book Birthday 🎂⠀ .⠀ Happy Pub Day to Saint X and a huge thank you to @celadonbooks for my gifted copy! First let’s start off by saying I have a soft spot for books that have a main character with my name. Even though Alison is the murdered character here, it still makes me like the book more. Is it just me that likes books that use my name for a character?! 🤷🏼‍♀️⠀ .⠀ The writing format took me a little bit to get into and while the writing works, I would have preferred it to be different. The story itself was good not great! It wasn’t my favorite mystery lately but I still enjoyed it. ⭐️⭐️⭐️⭐️ head over to my blog, link in bio for my full review. ⠀ .⠀ .⠀ #speakingof #speakingofbooks #bookblogger #bookreviewsneedlovetoo #notjustaprettybook #saintx #mysterybook #speakingofblog #sablogger #newbook #newbookrelease #murdermystery #bookbirthday #newbooks #celedon
Speaking of...February Check In⠀ .⠀ Halfway though February and just seeing how everyone is doing on their reading lists this month! I’ve finished 5 books so far this month with three of them being ⭐️⭐️⭐️⭐️⭐️. Check out my blog, link in bio to see which ones got all the stars. ⠀ .⠀ How many have you read so far? Any ⭐️⭐️⭐️⭐️⭐️ winners?? ⠀ .⠀ .⠀ #speakingof #midwaycheck #febreading #bookstack #dreamland #saintx #longbrightriver #bringingdowntheduke #theanimalsatlockwood #bookishfirst #bookstabuddies📚
Speaking of...Sadie Sunday!⠀ .⠀ Sadie is here to remind everyone that the @letsreadrantrepeat bookclub goes live tonight at 7pm CST! We’re trying something new and the questions for our LIVE are already posted on our Facebook Group! Make sure you plan to join us! ⠀ .⠀ Spoiler alert, I loved this book and I have a full review of the book up on my blog this am! Link in bio so check it out! ⠀ .⠀ .⠀ #speakingof #speakingofbooks #letsreadrantrepeat #letsreadrantrepeatfebruary #longbrightriver #botm #buddyreads #bookclub #pupsandpages #sadiesunday #ladysadie #bookofthemonth #bookclubreads #bookblogger #bookstagram #sablogger #blogger #books
Speaking of...Valentine’s Day . Just wishing everyone a Happy Valentine’s Day. Sadie & I love you all! If you are in need of a Love story to read today, head over to my blog were I’ve posted a few of my favorite love stories! Link in bio! . . #speakingof #speakingofbooks #bookstack #pupsandpages #valentinesstack #redbooks #hearts #loveday #ladysadie #speakingofblog #bookblogger
Speaking of...TBT⠀ .⠀ Throwing it back to that one time I got married and took a book with me to my own wedding. It was a pretty fitting title for me to be reading while wearing a wedding dress! ⠀ .⠀ But in all seriousness, The Gown is an exceptional story about the women who created the Queen’s wedding dress. It also covers alot of the hardships so many people faced post the World Wars especially in Europe. Being a fashion design major this book spoke to me on so many levels. I have a full review of it on my blog from December if you need more convincing to read it. ⠀ .⠀ We finally got our wedding pictures in & check out my stories for some full pictures of my 50lb wedding gown! I wanna see your dresses too ladies and I wanna know what made you fall in love with your gown! My dress had pockets which sealed the deal for me 😂. Make sure to tag me in you stories so I can see your dresses & show us pictures of what you wore to get married in! #thegown⠀ .⠀ .⠀ #speakingofbooks #speakingoftbt #speakingofblog #thegown #weddingdress #weddingday #historicalfiction #alwaysreading #jenniferrobertson #park31 #kendrascott #millanovabride #millanovedress