“The secrets lurking in a rundown roadside motel ensnare a young woman, just as they did her aunt thirty-five years before, in this new atmospheric suspense novel from the national bestselling and award-winning author of The Broken Girls.

Upstate NY, 1982. Every small town like Fell, New York, has a place like the Sun Down Motel. Some customers are from out of town, passing through on their way to someplace better. Some are locals, trying to hide their secrets. Viv Delaney works as the night clerk to pay for her move to New York City. But something isn’t right at the Sun Down, and before long she’s determined to uncover all of the secrets hidden ”

Hi, yes, shocking I picked a thriller book up from Book of the Month for my January box! I’ve been hesitate to read this book though, because it has been super hyped for the past few months.  I don’t do good with extremely hyped books, I feel like I hate them just because everyone else loved them. But this was not the case for The Sundown Motel. I loved this book.

Viv Delaney, goes missing in the middle of the night in 1982 from the motel she’s been working nights out. The hotel has it’s fair share of rough characters but it’s the supernatural ghosts that have Viv freaked out. That is until she learns who the ghosts are and finally figures out the dark secret of one of here most frequent guests.

35 years later, Viv’s niece Carly, is determined to figure out what happened to her aunt Viv. She heads to Fell, NY and the Sundown Motel. She winds up getting the same job as the night clerk at the motel where her aunt Viv disappeared from 35 years earlier.

Both women are head strong and I love the way St. James created their characters. They’re both very flawed but are generally the same type of person, which tends to happen in families. Both women experience some very scary situation both from paranormal to dangerous situations with men, and they don’t handle them like the dumb main protagonist does in some thriller books.

The one thing I would say that I should warn readers about is that, as with most of St. James’ books, you need to just believe things can happen. She doesn’t explain the paranormal activities that occur in this particular book. There are a lot of things left without explanations, such as how the ghosts are haunting the hotel to begin with, but I personally thing it adds to the suspense of the book. Plus I love supernatural story so I don’t need answers there. And that’s my one teeny tiny complaint about this book.

Otherwise, I read this book in a single night. I was exhausted the next day but it was totally worth it! Now to find other Simone St. James books to read until her next one comes out!

This book comes out February 18th! If you think you’d like to read this book, pre-order your copy HERE!

I hope you enjoyed my thoughts on The Sundown Motel. If you liked this review please let me know either by commenting below or by visiting my instagram @speakingof_books. 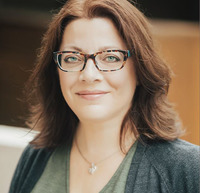 Simone St. James is the award-winning author of The Broken Girls and The Haunting of Maddy Clare, which won two RITA awards from Romance Writers of America and an Arthur Ellis Award from Crime Writers of Canada. She wrote her first ghost story, about a haunted library, when she was in high school, and spent twenty years behind the scenes in the television business before leaving to write full-time. She lives outside Toronto, Canada with her husband and a spoiled cat.

Speaking of...BUDDY READ ANNOUNCEMENT⠀ .⠀ On Sunday we had our February discussion for @letsreadrantrepeat and once again I am reminded how amazing the #bookstagram community is. I’m so grateful to have so many amazing people to chat with about books & to have made so many friends in this community!! Especially @readwithwine because without #booksta I never would have know she lives 7 minutes from me! ⠀ .⠀ Ok enough sap! Our March pick for our book club #letsreadrantrepeat is going to be, by popular demand, The Holdout! Our LIVE discussion will be held Sunday March 15th at 7pm CST over on the @letsreadrantrepeat stories! Are you wanting to read this book?? Then join us by commenting below 👇🏼👇🏼👇🏼. ⠀ .⠀ .⠀ #spekaingofbooks #buddyread #bookclub #virtualbookclub #theholdout #crimebook #letsreadrantrepeatmarch #botm #bookofthemonth #readingwithfriends #pupsandpages #ladysadie #booksanddogs #dogsofinstagram #books #bookblogger #speakingofbookclubs #speakingofblog #speakingof
Speaking of...Book Birthday 🎂⠀ .⠀ Happy Pub Day to Saint X and a huge thank you to @celadonbooks for my gifted copy! First let’s start off by saying I have a soft spot for books that have a main character with my name. Even though Alison is the murdered character here, it still makes me like the book more. Is it just me that likes books that use my name for a character?! 🤷🏼‍♀️⠀ .⠀ The writing format took me a little bit to get into and while the writing works, I would have preferred it to be different. The story itself was good not great! It wasn’t my favorite mystery lately but I still enjoyed it. ⭐️⭐️⭐️⭐️ head over to my blog, link in bio for my full review. ⠀ .⠀ .⠀ #speakingof #speakingofbooks #bookblogger #bookreviewsneedlovetoo #notjustaprettybook #saintx #mysterybook #speakingofblog #sablogger #newbook #newbookrelease #murdermystery #bookbirthday #newbooks #celedon
Speaking of...February Check In⠀ .⠀ Halfway though February and just seeing how everyone is doing on their reading lists this month! I’ve finished 5 books so far this month with three of them being ⭐️⭐️⭐️⭐️⭐️. Check out my blog, link in bio to see which ones got all the stars. ⠀ .⠀ How many have you read so far? Any ⭐️⭐️⭐️⭐️⭐️ winners?? ⠀ .⠀ .⠀ #speakingof #midwaycheck #febreading #bookstack #dreamland #saintx #longbrightriver #bringingdowntheduke #theanimalsatlockwood #bookishfirst #bookstabuddies📚
Speaking of...Sadie Sunday!⠀ .⠀ Sadie is here to remind everyone that the @letsreadrantrepeat bookclub goes live tonight at 7pm CST! We’re trying something new and the questions for our LIVE are already posted on our Facebook Group! Make sure you plan to join us! ⠀ .⠀ Spoiler alert, I loved this book and I have a full review of the book up on my blog this am! Link in bio so check it out! ⠀ .⠀ .⠀ #speakingof #speakingofbooks #letsreadrantrepeat #letsreadrantrepeatfebruary #longbrightriver #botm #buddyreads #bookclub #pupsandpages #sadiesunday #ladysadie #bookofthemonth #bookclubreads #bookblogger #bookstagram #sablogger #blogger #books
Speaking of...Valentine’s Day . Just wishing everyone a Happy Valentine’s Day. Sadie & I love you all! If you are in need of a Love story to read today, head over to my blog were I’ve posted a few of my favorite love stories! Link in bio! . . #speakingof #speakingofbooks #bookstack #pupsandpages #valentinesstack #redbooks #hearts #loveday #ladysadie #speakingofblog #bookblogger
Speaking of...TBT⠀ .⠀ Throwing it back to that one time I got married and took a book with me to my own wedding. It was a pretty fitting title for me to be reading while wearing a wedding dress! ⠀ .⠀ But in all seriousness, The Gown is an exceptional story about the women who created the Queen’s wedding dress. It also covers alot of the hardships so many people faced post the World Wars especially in Europe. Being a fashion design major this book spoke to me on so many levels. I have a full review of it on my blog from December if you need more convincing to read it. ⠀ .⠀ We finally got our wedding pictures in & check out my stories for some full pictures of my 50lb wedding gown! I wanna see your dresses too ladies and I wanna know what made you fall in love with your gown! My dress had pockets which sealed the deal for me 😂. Make sure to tag me in you stories so I can see your dresses & show us pictures of what you wore to get married in! #thegown⠀ .⠀ .⠀ #speakingofbooks #speakingoftbt #speakingofblog #thegown #weddingdress #weddingday #historicalfiction #alwaysreading #jenniferrobertson #park31 #kendrascott #millanovabride #millanovedress