The Paris Hours is the story of four separate lives after the first World War. All their lives have been impacted by the war, some more than others. But this story is more about how lives are connected and plays to the saying ‘it’s a small world’. All of our main character’s stories are intertwine and they all meet one way or another within the same day in Paris. The unique setting of Paris between the World Wars, and the sprinkling of prominent historical characters such as Hemingway & Josephine Baker was beautifully crafted. I really enjoyed the mix between fictional and actual characters.

This was one of my April Book of the Month picks, you can see the rest of my picks from April HERE! Originally I had hear great things about this book, but honestly, I didn’t like it very much at first. There are a LOT of different stories going on and I had a hard time remembering who was who and who was doing what. They’re are so many names and just keeping them straight was difficult. I normally love multiple POVs and I do really well with names, but for some reason this one was hard for me to keep track of. This book is also less than 300 pages, and it took me a week to read. That is unheard of for me. If a book is under 300 pages I generally read it in a night.

However, as the story moved on I found I really enjoyed each of the individual stories taking place. Each time one of the main characters crossed paths with another, I would get really excited! It was interesting the way you saw the same events through different eyes, and while I still wish this was maybe split into 2-3 stories I ended up really enjoying and appreciating this book.

The character development in such a short book is incredible. Their stories are vivid and while they switch between past and present, each one contributes to the overall story line in a wonderful way. Because of the depth of the characters and the secrets they hide this is a dense book. Which would explain why it took me so long to read. After finishing the book though, I really appreciate the thought that went into creating these characters and I would not mind a few additional books expanding on each of their lives.

What started as a 2-3 star book for me grew to a 4 star book because of the ending. So if you decide to pick up this book just give it a chance. This book is out now and you can get it HERE!

I hope you enjoyed my thoughts on The Paris Hours. If you liked this review please let me know either by commenting below or by visiting my instagram @speakingof_books. 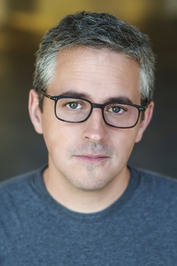 Alex George is a writer, a bookseller, a director of a literary festival, and a lawyer. He was born in England, but presently lives in the midwest of America.

His novel, A Good American, was published by Amy Einhorn Books, an imprint of Penguin/Putnam, in February 2012. It was a #1 Indie Next Pick, a Barnes and Noble Discover New Writers Pick, an Amazon Best Book of the Month, a Midwest Connections Pick, and a a Library Journal Best Book of the Year. It was a national and international bestseller.

Setting Free The Kites was published in 2017, also by Penguin. It was an Indie Next Pick, a Barnes and Noble Best Fiction Pick, a Library Reads Choice and a Midwest Connection Pick.

His latest novel, The Paris Hours, will be published by Flatiron Books, an imprint of Macmillan, on May 5, 2020.

Alex read law at Oxford University and worked for eight years as a corporate lawyer in London and Paris. He moved to the United States in 2003. In addition to writing, he owns an independent bookshop, Skylark Bookshop, in downtown Columbia, MO. He is also the founder and director of The Unbound Book Festival, which will be holding its fifth annual festival in April 2020. Past guests have included Michael Ondaatje, Salman Rushdie, Zadie Smith, and George Saunders. He is also a practicing attorney in his spare time.

Alex has been named as one of Britain’s top ten “thirtysomething” novelists by the Times of London, and was also named as the Independent on Sunday’s “face to watch” for fiction in its Fresh Talent feature.

Alex is married to the writer, professor, and critic, Alexandra Socarides. They live in Columbia, Missouri with their four children.