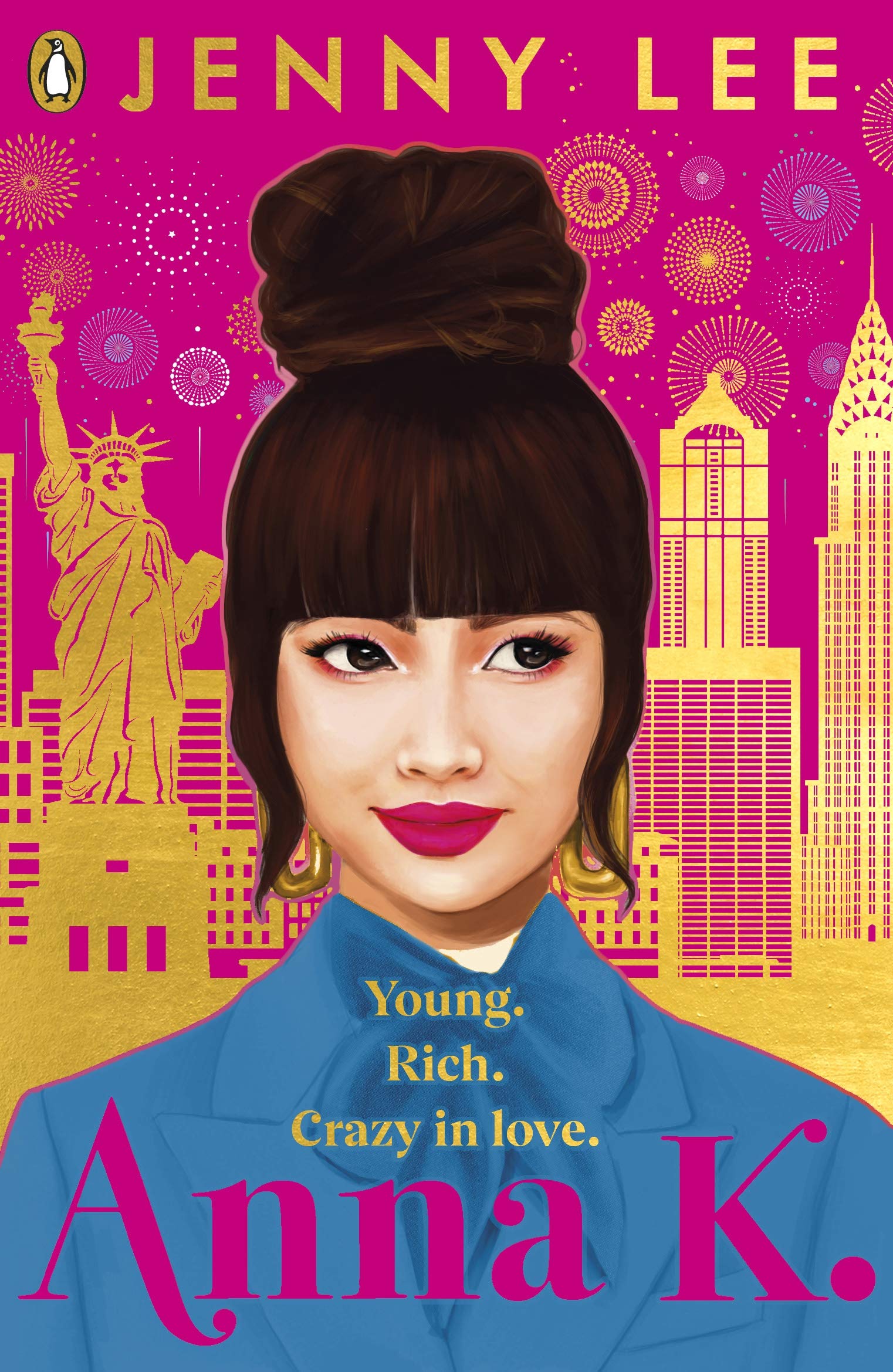 “At seventeen, Anna K is at the top of Manhattan and Greenwich society (even if she prefers the company of her horses and dogs); she has the perfect (if perfectly boring) boyfriend, Alexander W.; and she has always made her Korean-American father proud (even if he can be a little controlling). Meanwhile, Anna’s brother, Steven, and his girlfriend, Lolly, are trying to weather an sexting scandal; Lolly’s little sister, Kimmie, is struggling to recalibrate to normal life after an injury derails her ice dancing career; and Steven’s best friend, Dustin, is madly (and one-sidedly) in love with Kimmie.

As her friends struggle with the pitfalls of ordinary teenage life, Anna always seems to be able to sail gracefully above it all. That is…until the night she meets Alexia “Count” Vronsky at Grand Central. A notorious playboy who has bounced around boarding schools and who lives for his own pleasure, Alexia is everything Anna is not. But he has never been in love until he meets Anna, and maybe she hasn’t, either. As Alexia and Anna are pulled irresistibly together, she has to decide how much of her life she is willing to let go for the chance to be with him. And when a shocking revelation threatens to shatter their relationship, she is forced to question if she has ever known herself at all.

Dazzlingly opulent and emotionally riveting, Anna K: A Love Story is a brilliant reimagining of Leo Tolstoy’s timeless love story, Anna Karenina―but above all, it is a novel about the dizzying, glorious, heart-stopping experience of first love and first heartbreak.”

Before I go to far into my review for this book, just know three things.

Basically what I’m saying is that Anna K, is not a book I would normally pick. Which is great because I initially got Book of the Month to help branch out of my comfort zone. However, it’s a lot harder to win me over with this book, so you’ve been warned.

Anna K and her friends are all way wealthier than I will probably be in my entire life. They’re rich kids with very rich kid problems. They party, fly on private jets, show dogs at Westminster all while going to top notch private schools and basically being unmonitored all of the time. What could possible go wrong. Everything, everything goes wrong.

As entertaining as I found this book to be and slightly unrealistic (at least to me because I wasn’t raised as a rich kid in Manhattan) there is still an attempt at depth. Lee covers a lot of what it’s like to be a teenager dealing with emotions such as love, lust, and figuring out the difference between the two. Which honestly, most adults don’t even know the difference. She also did a fairly good job of following the original classic without just throwing random things into the mix that don’t fit just to be similar. I liked the extra departure from the original book. Keep in mind it’s been years since I read  Anna Karenina, so maybe I’m just not remembering clearly.

I really enjoyed the writing style of jumping between character perspectives. I know to some it may be confusing because you never know who’s perspective you have when switching paragraphs, but for me it added to the ‘dramaaaaa’.

All the characters were well developed. They each had individual characteristics, ticks, and thoughts that really made them stand out from each out. I could envision Bea with a sly smile or even Dustin’s nervous stutter. All the characters just worked for me. My favorite character was Beatrice, while not a main charcter, she’s sort of a good villain. The devil’s advocate you might say. She’s wild, free, and funny. I want to be her friend. Eleanor of course is the worse charater and Lee made sure you would be incredibility annoyed by her. She’s the actual devil in disguise.

Past individual characters though, I really enjoyed seeing the relationships be established and grow between the various characters. The contrast between the Stephen/Anna versus the Kimmie/Lolly relationship really puts it into perspective how different siblings can be. Not just personality wise but also the way the dynamic shifts. It’s a good reminder that no two sibling relationships are the same.

Overall I liked that book. I hear there is a sequel coming out, and while I will most likely put it on my list to read, it won’t be something I’m dying to get my hands on. ★★★★

Another note: while this book is labeled as a YA, which it is. It’s an older YA book, with lots of references to drugs, sex, etc. Definitely not for a 13 year old, but at the same time maybe? What do I know, I don’t have kids.

This book is out now! If you think you’d like to read this book, get your copy HERE!

I hope you enjoyed my thoughts on Anna K. If you liked this review please let me know either by commenting below or by visiting my instagram @speakingof_books. 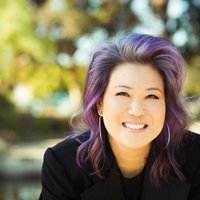 Jenny Lee’s first young adult novel, a modern reinvention of Anna Karenina titled Anna K., was published by Flatiron Books in 2020. She previously served as Co-Executive Producer for the BET television adaption of Boomerang. She was a writer and producer on the ABC Family sitcom Young & Hungry as well as the Disney Channel’s number-one-rated kids’ show Shake It Up. The author of four humor essay books, Jenny is also the author of Elvis and the Underdogs. Lee is represented by Paradigm on behalf of Sally Wofford-Girand of Union Literary.

Speaking of...#Bookreview⠀ .⠀ Another book review for another new book released this week! Sin Eater follows May, who due to circumstances is made a Sin Eat at age 14. What’s a Sin Eater you may ask, well they are women who are branded with an ‘S’, forced to be mute, and who eat your sins before you die so that you can go on to The Maker in peace. When May attends ‘an eating’ at the Queen’s palace, she stumbles upon a plot to kill the Queen and this is where our real story starts. During her search for answers May befriends lepers, actors, and the dregs of society. With a little help she may even find the courage to live her life on her terms. ⠀ .⠀ I really wanted to like this book. It was compared to Alice and Wonderland and I just don’t get the comparison. This is more a retelling of the rivalry between Mary Queen of Scots & Queen Elizabeth. The book is well written, but I just could not get into it and was excited for it to be over. ⭐️⭐️ head over to my blog for my full review of the book. ⠀ .⠀ What other books have you recently read that you wanted to love but didn’t? ⠀ .⠀ Thanks to @atriabooks & @netgallery for my advanced copy! ⠀ .⠀ .⠀ #speakingofbooks #aprilreleases #newbooks #sineater #speakingofblog #speakingof #bookreview #bookblogger #bookreviewsneedlovetoo #notjustaprettybook #sadielady #ladysadie #pupsandpages #alwaysreading #bookriot #bookstagrammer #bookstabuddies📚 #yelpreads #reader #sablogger
Speaking of...Book Review⠀ .⠀ Happy Book Birthday to The Roxy Letters! This Texas girl loves books that take place in Texas especially places I frequent! My best friend actually lives down the street from where the majority of this book takes place and I’ve walked to the Whole Foods & @bookpeople that Roxy is consumed with in this book. ⠀ .⠀ This is such a fun book. I needed it between the thrillers and heavier books I’ve been reading. Roxy bothered me at first. I felt that she was constantly throwing herself a pity party. But as the story goes on Roxy evolves with it and I think she’s sorta a badass now. I also loved the fact that while there was romance in this book, it promotes healthy women friendships! Basically its a fun and fast read, perfect for these stressful time right now. I’ve got a full review up on my blog this am, link in bio! ⠀ .⠀ Another huge shout out to @thebookblondie & @marypaulinelowry for my signed copy! Also I tried to make Sadie wear the glass for this picture but she’s not as well behaved as Cooper is (@readingretriever). ⠀ .⠀ .⠀ #theroxyletters #marypaulinelowry #newbooks #bookbirthday #fastreads #austinbooks #texasbasedbooks #bookblogger #bookstagram #sablogger #speakingofbooks #speakingof #speakingofblog #bookstabuddies📚 #bookreview #notjustaprettybook #bookreviewsneedlovetoo
Speaking of...Book of the Month! ⠀ .⠀ Both my little blue boxes are finally here and honestly I don’t think there is a better way to start the week, than with a little bit of #bookmail. This month I opted for all of the April picks because well they all sound really great. Beach Read, Valentine, & Library of Legends have all been on my radar for a while, and I’m just stoked to finally have a copy. ⠀ .⠀ Which books did you pick this month??⠀ .⠀ None of this months books are too thick so I’m setting a goal to read all 5 this month! If you’re interested in joining #botm head to the link in my bio & use code TAKECARE to get your first book for $9.99. ⠀ .⠀ .⠀ #bookbassador #bookofthemonth #speakingofbotm #speakingofbooks #booklover #bookbox #booklover #alwaysreading #valentine #parishours #beachread #thelibraryoflegends #theguestlist #bookstagrammer #bookstagram #bookstabuddies📚
Speaking of...Sadie Sunday! ⠀ .⠀ Don’t let this picture fool you, it’s been storming since Thursday. We’re feeling extra cooped up this weekend since it’s been raining. The only good thing is I’m on my third book for the month and this is my line up for this week! What’re you planning on reading this week?? ⠀ .⠀ Anybody else joining is for the April @letsreadrantrepeat discussion of The Water Dancer on April 19th? You still have plenty of time to get the book in and read it to join us! ⠀ .⠀ .⠀ #sadiesunday #ladysadie #pupsandpages #speakingofbooks #speakingof #bookblogger #alwaysreading #currentlyreading #thewaterdancer #theotherpeople #dogsandbooks #mrnobody #thenewhusband #letsreadrantrepeatapril #bookclub #upnext #nowreading
Speaking of...bookstack saturday!⠀ .⠀ When your bestie asks you for book recommendations to keep her occupied during quaratine you drop everything and pick some books for her! Anyways hope everyone has a really great weekend! ⠀ .⠀ What’s your go to book recommendation for other people?!⠀ .⠀ .⠀ #speakingofbooks #speakingof #bookstacksaturday #bookstagrammer #bookblogger #speakingofblog #booklover #bookstack #bookstabuddies📚 #sadielady #pupsandpages #alwaysreading #bookrecommendation
Speaking of...Most Anticipated Releases⠀ .⠀ Another month means more amazing reads coming out! I know alot of publishers are pushing back the release dates of books due to COVID-19 but these ones are still on target to be released in April! My top recommendations so far are Little Secrets, Roxy Letters, & Sin Eater. The top books I’m looking forward to reading are The Women With Silver Wings, The Knockout Queen, & The Ancestors! Head over to my blog to see a full list of April releases I’m excited about! Link in bio! ⠀ .⠀ Also huge thanks to the tagged publishers for my advanced copies of these four April releases! ⠀ .⠀ Tell me what book you’re most looking forward to read in April! ⠀ .⠀ .⠀ #bookblogger #sablogger #bookreviewer #aprilreleases #newbooks #littlesecrets #thenewhusband #haveyouseenme #alwaysreading #thrillerbokks #newreads #bookrecommendations #speakingof #speakingofbooks #speakingofblog #bookstabuddies📚